The most difficult part of project designing lies in the proper positioning of elements and entities. Clashes emerge when designs of two or more entities show elements colliding in space or time sequence. If the clashes are not resolved at the design phase, they lead to rework, wastage, inevitable delays and budget overruns during the construction stage.

According to a McKinsey report, rework in construction accounts for almost 30% of overall construction cost in a typical project, and 98% of megaprojects overshoot their budgets by at least 30%, while 77% projects are 40% late in construction schedule.

Navisworks, an Autodesk software, offers a solution by accurately spotting clashes between models at the project design stage. It generates clash detection reports for contractors and architects by reading the geometric and time data of the models submitted by separate stakeholders.

Clash detection in a BIM workflow involves identifying clashes and collisions between separate models or their elements to resolve such issues at pre-construction stage. Usual clashes include space overlap of models or their parts, models in same project having parameters incompatible with one another, or an anomalous time sequence in 4D BIM modeling.

For instance, lack of adequate buffer space between HVAC ducts and ceiling or headspace for fire safety line.

For instance, improper sequence of activities such as concealing pipework in the flooring after the cement concrete is poured.

Navisworks is focused on review of designs, clash detection of models and elements, sharing and coordination, advanced simulation and validation, and realistic visualization and animations. It makes the designing phase of a project faster, when multiple stakeholders are using disparate designing software for their individual works.

The model used for construction sequencing seamlessly built on Revit and Navisworks capabilities. 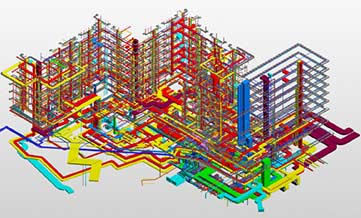 A clash free Revit model with 4D simulation using Navisworks Manage, was developed by TrueCADD for a student dorm room in the Middle East.

The 3D visualization offered by the BIM model provided greater project clarity at the initial stages of design. This lead to reduced reworks due to minimal clashes and the client was able to save on construction cost and time. 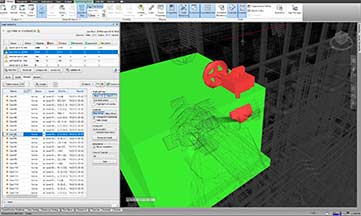 A clash free 3D Revit model was developed by TrueCADD for a university building in the US.

The client completed the project within scheduled time and also saved on cost. 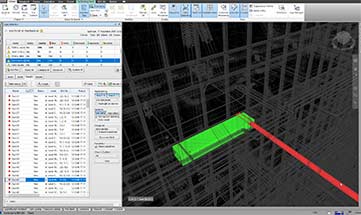 A clash free 3D MEP Revit model with LOD 400 along with clash detection reports in Navisworks for an International Airport in the Middle East, helped the client save $7 million in 6 months.

The team of experts at TrueCADD assessed the IFC drawings at DD level to identify and resolve clashes with accurate material and resource planning.

The BIM/VDC tools as well as the collaborative project delivery approach led to early project completion and 100% of MEP system installation with zero change orders with minimal conflicts.

Bring your clash-detection challenges to us for accurate coordination and clash resolution.
Reach out to our BIM experts  »

4 Features of Navisworks for Clash Detection

The principal features of Autodesk’s Navisworks that helps it to control projects include:

1. Aggregation of data and model files

This feature of Navisworks allows users to combine data of design, construction, and other project data into a unified project model.

Navisworks scans and intelligently extracts relevant data from separate and original design files imported from various design software. It displays the data coherently as also visually, within a unified model.

An NWD file can include all loaded models, markups and comments, viewpoints, scene environment and everything required to provide a project ‘snapshot’ within a single file.

NWD files can be opened in any Navisworks edition. NWD files are much smaller than the original CAD files and can be opened with greater ease to have a bird’s eye view of an entire project.

If there is no modification, it loads the cache file making visualization faster. Navisworks uses NWF files when simultaneously referencing multiple CAD files, and the Navisworks cache helps to cut down on the load times of these CAD files.

With smaller files and better rendering features, Navisworks allows easy creation of virtual walkthroughs of a project. It includes each part of the representation being tied with data that can be retrieved and inspected instantly. 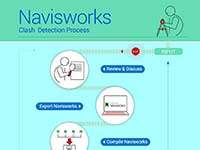 By enabling all stakeholders to visualize, understand, and remove clashes at pre-construction stage, BIM clash detection has changed the world of construction designing. Navisworks has come to dominate the market as the tool of choice to reveal clashes.

Navisworks is increasingly being used by all stakeholders in construction projects including civil engineers, architects, and structural engineers, mechanical, electrical and plumbing engineers. Even non-engineers who need to visualize the project, are adopting Navisworks.

Our BIM clash experts can help you save project cost & time.
Reach out to us  →

TrueCADD is a leading CAD drafting services and BIM modeling solutions provide company in India. At TrueCADD, we provide high quality and cost-effective CAD outsourcing services to worldwide customers such as architects, designers, engineers, contractors, manufacturers, fabricators and building owners. Our flexible in-house capacity, combined with our vast experience and strong resource base help us understand the requirements of international clients and provide reliable CAD outsourcing services for a wide spectrum of industries.

Need help on an ongoing basis?

We establish long term business relationships with clients and are committed to total customer satisfaction.